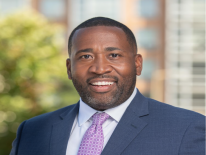 Keith A. Anderson is the Director of the DC Department of General Services (DGS), a government agency with a mission to build, maintain and sustain the District of Columbia’s real estate portfolio, which includes more than 157 million square feet of land and 35.7 million square feet of state-of-the-art facilities. This work allows the agency to foster economic viability, environmental stewardship, and equity across all eight wards of the city. With a workforce of just under 700, DGS is responsible for maintaining 844 buildings, including educational, municipal and recreational locations.

Prior to DGS, Mr. Anderson was the Director of the DC Department of Parks and Recreation (DPR). He served as Director of the DC Department of Environment (DDOE) prior to DPR. During his tenure at DPR, Mr. Anderson oversaw the construction and or modernization of 79 recreation projects including recreation facilities, fitness center renovations, and facility security upgrades. He also oversaw the installation of three new tech lounges and the District’s first meditation garden.

Mr. Anderson’s concentration on customer service spurred the implementation of a new registration and permitting system, an expansion of summer camp offerings, and the realization of Mayoral initiatives including the ‘Safer Stronger Summer Enrichment Program’ at Savoy Elementary School, Destination DPR, and the reactivation of DPR’s residential campsite in Scotland, Maryland. He also successfully guided the agency through re-accreditation by the Commission for Accreditation of Park and Recreation Agencies (CAPRA), awarded for excellence in operation and service.

Mr. Anderson has served on several professional organizations, including as President of the D.C. Chapter of the National Forum of Black Public Administrators (NFBPA); the DC Water and Sewer Authority (WASA); Chairman of the Principal’s Staff Committee for the Environmental Protection Agency (EPA) Chesapeake Bay Program; the Ward 5 Land Transformation Task Force; Chairman of the DC Sustainable Energy Utility Advisory Board; and as a Board Member the National Association of State Energy Officials.

Director Anderson is a native Washingtonian, a graduate of DC’s public school system, and earned his bachelor’s degree from Hampton University. He currently resides in Ward 4 with his wife and children.